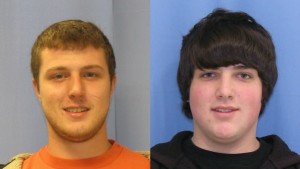 On 03/13/2013, the Manheim Borough Police Department began an investigation into a burglary on the 100 block of North Hazel Street. Investigation showed that the subjects entered the residence by breaking a window at the rear of the house. During the commission of the burglary, a television, Playstation 2, money, credit card and a plethora of jewelry were stolen.  The total value of loss was estimated over $2, 500.00.

Several days later, during an unrelated incident, the Manheim Police arrested Kyle Edward Dodson for possession of drug paraphernalia at his home in Manheim. During the arrest, Dodson was in possession of a large amount of jewelry; which matched the description of the stolen jewelry from the burglary. Police seized the jewelry, which was later showed to the victim of the burglary and was identified as stolen property.

Several days later, the victim reported that their stolen credit card had been used at a Turkey Hill in Lancaster. Upon reviewing the store surveillance video, police were able to identify a second suspect as John Macon Kirtley.

Both Dodson and Kirtley were charged with Criminal Conspiracy to Commit Burglary, Criminal Trespass, Theft by Unlawful Taking and Access Device Fraud.

The warrant was served on Kirtley, who was later incarcerated at the Lancaster County Prison. The warrant for Dodson is still active and he is currently wanted by police.