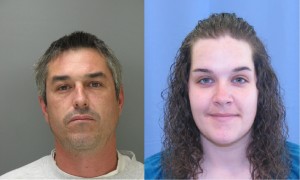 On 08/16/2013 the Manheim Borough Police Department received the report of a residential burglary in the 900 block of Drager Road, Columbia (Rapho Township).  A safe and other personal belongings were stolen during the burglary.

Through an investigation it was determined that Brittney L. Severt and Clifford M. Bell had been selling items stolen during several other burglaries that the Manheim Borough Police are investigating.  Upon learning that the police were responding to their residence, both subject fled and have not been located.

During the burglaries, Severt was observed wearing nursing style pants and tops, often referred to as “scrubs” by witnesses.  If anyone observed Severt or Bell in the past three months, please contact Detective Jeffrey Kiesel at 717-665-2481.

Manheim Borough Police seek assistance in locating and apprehending these two individuals, and anyone who sees them or knows their whereabouts contact police 717-664-1180 or Crime Stoppers at 1-800-322-1913 or www.lancastercrimestoppers.org.