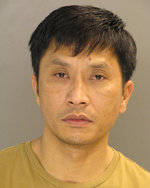 On Thursday, February 8, 2013, Detectives from the Lancaster County Drug Task Force, along with Manheim Borough Police Officers executed three search warrants at a Rapho Township motel.  The raid concluded a two month investigation into the trafficking of cocaine by former Manheim Borough resident, Phonxay “Si” Douangsouri, who stayed at the motel several days per month.  Douangsouri currently lives in Atlanta, GA, but often came back to the Manheim area for the sole purpose of selling cocaine.  The investigation began in January with undercover detectives conducting surveillance of Douangsari at the motel, and led to undercover purchases of amounts of cocaine from Douangsouri.

During the raid, detectives detained Douangsouri as he arrived back at the motel room in his vehicle.  Search warrants were executed on his person and vehicle at that time.  Douangsari was found to have a plastic zipper-sealed bag hidden down the front of his pants.  That bag was found to contain (11) smaller plastic zipper-sealed bags that contained powder cocaine, and (20) similar bags that contained crack cocaine.  Each of the (31) smaller bags would have sold on the street for $50.00 a piece.  Douangsouri was placed under arrest at that time.  Detectives then searched Douangsouri’s motel room and located two large, knotted plastic baggies that contained a total of approximately (120) grams of powder cocaine; and (155) additional $50.00 bags of cocaine power and crack cocaine.  The cocaine seized in this raid has a street value of approximately $13,000.00.  Additionally, drug paraphernalia commonly associated with the sale of drugs, such as a digital gram, a cutting agent and new plastic bags were located in the motel room.  Detectives also seized approximately $900.00 in cash and Douangsouri’s vehicle as suspected assets from sales of cocaine.  All of the cocaine seized in this raid was earmarked for distribution in Lancaster County.

Douangsouri was charged with two counts of Possession with Intent to Deliver Cocaine and Possession of Drug Paraphernalia.  He was arraigned by Magisterial District Justice Mary Sponaugle and committed to Lancaster County Prison on default of $75,000.00 cash bail.  Douangsouri is also detained at the prison on PA State Parole detainer due to this investigation.